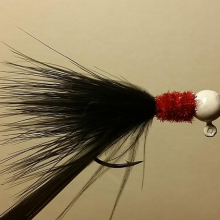 Despite it’s odd color combination fishing the Nightmare Jig for steelhead is one of the most effective ways to snag a trophy fish.

So just what is it about these little jigs that make them so effective and what is the best way to fish a Nightmare jig for steelhead?

​Fishing a nightmare for steelhead usually involves working the jig to give it some life.

If you are not familiar with the Nightmare Jig it is a type of jig pattern with a very distinct look and a strict color combination:

​There are quite a few variations on the pattern of the Nightmare jig however, they mostly conform to what is described above.

It appears that the contrasting colors of black, red and white seem to bring out a predatory instinct in steelhead.

A lot of steelhead lures do still to plain colors such as silver or gold but they have the added advantage of a reflective material. With the nightmare however it really is the contrast between the colors.

Why they strike them is not that important really. Learning how to present them is more important.

​When fishing with nightmare jigs your two best options are:

​Just be aware that the naming can be a little bit confusing. Some people will refer to drifting when they are actually talking about float fishing. They will use the term to “drift” their float down the river.

The choice between either technique will usually come down to water speed and how deep the river is.

In faster water it is best to drift the nightmare lure along the bottom. Whereas in slower moving water the better option is to use a float.

Drifting is what can be defined as a bottom up approach to jig presentation. You can either add weight to the line several feet from the jig or use no weight and rely on the weight of the jig itself.

When using weight the technique involves drifting the weight along the bottom. The unweighted jig is then free to move through the water in a much more natural manner.

​Without weight the jig is just cast on light gear and worked along with the current adding the occasional twitch to give it some life.

Float fishing as the name suggest involves suspending the jig beneath a float or bobber. You can fine tune the depth at which the jig will run.

It is easily the most popular method when fishing for steelhead with a nightmare jig.

You can use either a fixed float or a slip float. The fixed allows you to fish at a specific depth whereas the slip float has the added ability or varying the depth. If you are just starting out then you may want to stick to the fixed float.